One of Darren’s favorite things to make is a smoothie, and yes it’s a green one loaded with natural flavors and awesome ingredients he picks out himself. He’s only five and still needs a little help in the kitchen when making this, but his excitement of creating smoothies is legit!

To simplify this process while still letting him have independence and feel creative I keep a few staples in my freezer and pantry on hand. Breaking down the smoothie operation into four categories of protein, fruit, vegetable, and liquid and letting him pick at least one item from each category is key for when the smoothie cravings strike. Kids love options, so let’s give them some!

2.) FROZEN FRUIT: Bags of frozen fruit: pineapple, mango, strawberry and mixed berry. At the end of each week when the bananas start to turn brown, I peel them, chop them, and toss them into the freezer for more fruit options.

Sometimes we might have an apple laying around that’s starting to get brown spots or some green herbs that are starting to wilt. It’s possible they might just end up in one of his creations too! Smoothies should be fun, and include ingredients YOU love best! Watching the kids experiment and experience different flavors and textures of food is a beautiful thing! One day Darren added in too much peanut butter and the smoothie was too thick. Literally, he ate it with a spoon, but he learned from this and that was cool! His favorite combo is featured here and the recipe is listed below. You can interchange any of the ingredients listed above – experiment and have fun with it!

Darren asked if I created a post about his smoothie would anyone else make it?? I said, I’m not sure – let’s see!?! If you make this smoothie or one that’s similar from the interchangeable various ingredients listed above, please show Darren some love and tag him with #darrensmoothie 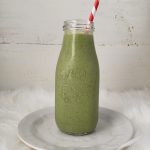 Darren asked if I created a post about his smoothie would anyone else make it?? I said, I’m not sure – let’s see!?! If you make this smoothie or one that’s similar show Darren some love and tag him with #darrensmoothie

Who loves a good board??? It’s a versatile spread that’s perfect for nibbling sports fans during Sunday football, but fancy enough for holiday entertaining, yet casual enough for Friday night Happy Hour. You can swing a well-played board any way!  We made this board for our Italian family Sunday dinner last weekend. For the kids and adults, this board was loaded with layers of flavors and textures to please the whole Italian crowd.

How do you build a good Board??!! Start off with a solid base to display the goodies on. I usually grab a wood cutting board or old cookie sheet (for rustic charm). If you have a slate board that works too. Next select a few cheeses with varying shapes and textures. For this board I pulled a light Brie, Blue Cheese to fill the endive, a soft petite breakfast like “cream cheese” (perfect for crackers), and a mild goat cheese. I also layered in some cut Monterey Jack & sharp cheddar for the kids to nibble on.

We hope this brings inspiration to your next gathering!! Just remember, you can’t go wrong with layering and playing with all sorts of flavors in a Charcuterie and Cheese Board! 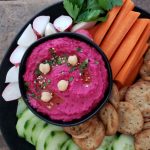 Bold and beautiful, roasted beet hummus is a refreshing addition to any
spread!! A whole lemon is featured in this recipe giving it
real zest! I always look for beets with tops and leaves in tact for ultimate freshness. I also save the tops, sauté them in a bit of olive oil or balsamic vinegar and salt for a delicious side dish to complete a meal.

Roasting red beets can be a messy job, but they are the most beautiful fuchsia pink hue when they come out of the oven. I roast them whole with the skin on wrapped in foil on a baking sheet at 375 degrees
Fahrenheit until cooked through, approximately 45 to 60 minutes depending on the size of the beets you get. Let the beets cool completely and use your fingers to rub off the skin. Get ready for pink finger tips but its worth it!! Slice peeled beet into quarters and process into small bits in a food processor.

With the beet bits ready you can now combine in all the remaining ingredients except the oil and blend until smooth consistency. Seriously, the most beautiful pop of flavor here comes from the whole lemon zest!! Look how beautiful it is resting in the food processor next to the beet bits!

Darren was my helper today in the kitchen … and yes he is wearing a shark Christmas sweater! HA! The last step is to slowly pour in oil and pulse until smooth. You can add a spoonful of water if needed to reach the consistency you like! Salt and pepper to taste always. Serve with fresh veggies, and pita or crackers!

Purple sweet potatoes are naturally beautiful – right? These babies were baked in foil and topped with toasted walnuts and cranberries for another spark of color. An easy french inspired, basic brown butter sauce, is infused with earthy flavors of sage and garlic to drizzle on top.

As a home chef, brown butter sauce is one of the first, and easiest sauces I learned to work with. Trust me – you can impress dinner guests with butter and a few fresh herbs in less than 10 minutes!! Place unsalted butter in a sauce pan over medium heat for a few minutes. As it begins to simmer you need to whisk the butter (with a whisk) until it begins to turn light brown in color. The whisking motion helps the butter to brown evenly!!! Browning the butter helps to bring out a nutty flavor that is excellent over just about everything from white fish to homemade popcorn. A few fresh herbs or spices like sage and garlic infused with the brown butter helps to elevate this sauce to a new level. 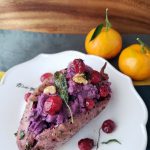 Make sure you purchase potatoes similar in size in order to have consistency with baking time. OPTIONAL DINNER PARTY GARNISH – Reserve 4 whole sage leaves and simmer in butter whole to get a crisp leaf to place on top of each potato. (As shown in picture)

Skillet chicken is a staple dinner for us during the workweek grind because its quick, easy, and fills up hungry kids!! Chicken in is such a versatile protein and can be transformed into so many different dishes with a few ingredients. The idea with this recipe is to create the sun-dried pesto spread in advance and transform your basic chicken into something delicious. This dish is cozy, colorful, and would ALSO be perfect for holiday entertaining!!!

The sun-dried tomato pesto spread will hold well for a week in the fridge stored in an airtight container. I have also made double batches of this spread to freeze in ice cube trays. Frozen cubes on hand help with dinner emergencies!! Defrost and toss with warm pasta and a side of sauteed spinach for a quick eat! For a weeknight meals this chicken pairs well with cauliflower rice. For entertaining this pairs well with whipped garlic & thyme mashed potatoes and roasted brussel sprouts with bacon. 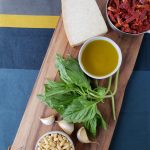 This pesto spread will hold for about a week in the fridge (drizzle additional oil on top to keep moist before storing in an airtight container in fridge). If you buy sun-dried tomatoes packed in oil cut the oil in the recipe by 2 tablespoons.

Warm, vibrant, and super tasty sun-dried tomato pesto spread!! We love this pesto especially during the winter months when we don’t have the garden. This pesto is so versatile and delicious stuffed inside or topped on chicken. It can also be tossed with warm pasta or served as spread toasted on a baguette! Really, the options are endless! I have even used it as the base of a great hummus sandwich!! This pesto is thick and ‘paste-like’ but it’s packed with ALL the flavor and some great nutrients.

Sun-dried tomatoes have a concentrated source of nutrients including vitamin C, vitamin K, and also iron. You can find them available dried or packed in oil. For this recipe I used the dried version. If you can only find the kind packed in oil I would cut back on the amount of oil you use overall in the recipe by 2 tablespoons.

This pesto will hold for about a week in the fridge (make sure you drizzle fresh oil on top before storing to keep the mixture moist). This spread is perfect to make ahead for entertaining or workweek dinners! The big bonus here is that the kids loved it as much as the adults! Winning!!

This pesto spread will hold for about a week in the fridge (drizzle additional oil on top to keep moist before storing in an airtight container in fridge). If you buy sun-dried tomatoes packed in oil cut the oil in the recipe by 2 tablespoons.

Ahh baby food. It’s mushy, colorful and nothing compares to it being homemade.  Here are some quick tips and tricks on how you can make fresh & unprocessed puréed baby food in no time at all. The trick is to make large batches and freeze it!

Shopping List of veggies to mash and puree into baby food:

Try to steam as many of the veggies as possible to retain the most nutrients. Note: All of the veggies listed above will have different cooking rates but will be finished when you can easily pierce a fork through each. Steam each batch of veggies above separately.

Suggested cooking rates based on size of each veggie:

Please note these are recommendations as a Mom, not a Doctor. Please consult with your pediatrician regarding introducing solid foods to your baby and discuss any foods which may pose allergy risks for your baby.

Suggested Tools to Simplify your Life: 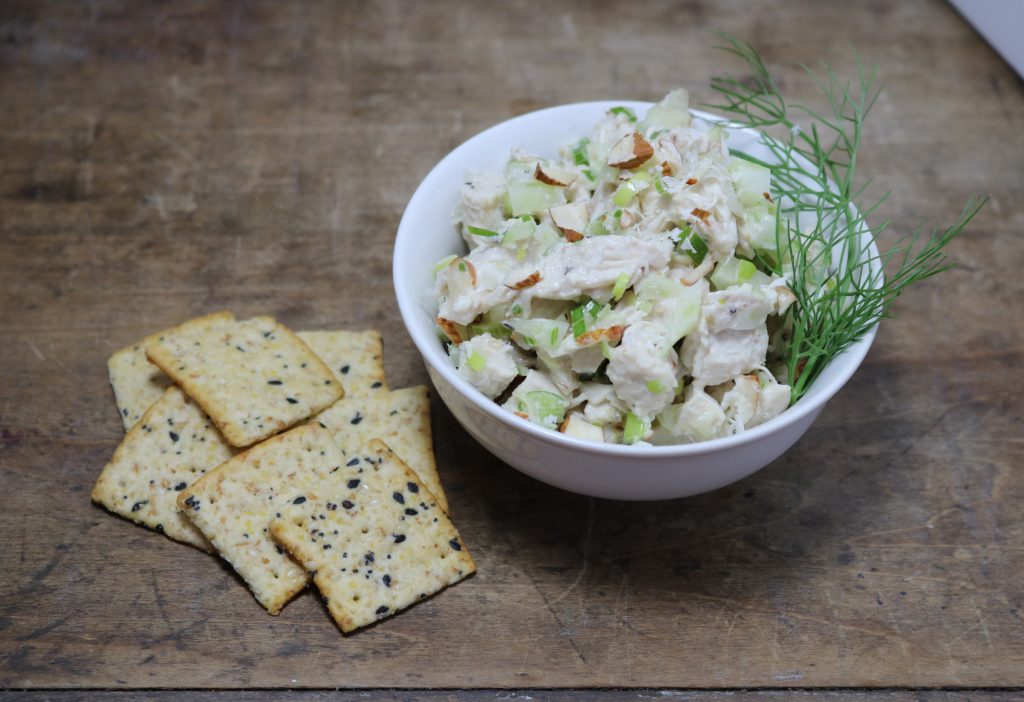 Chicken Salad is a forever versatile American classic! Some would say my mom makes the best and I would tend to agree. It’s served hot with chunks of white meat chicken mixed in melty cheese combined in a tangy vinaigrette caesar dressing. She serves it warm atop buttery flaky French croissant. While this chicken salad is comforting and will forever take me straight back to my childhood – I have had dealings with many other chicken salads over the years. Another drool worthy salad comes from my mother-in-law. With a New York vibe this salad is the kind with pulled rotisserie chicken smothered in mayo with chunks of celery, walnuts, granny smith apples & cranberries. Crunchy and delish on sliced multigrain bread – she made this for me while I was home on maternity leave with both my children! Two delicious salads from two remarkable mothers! With this I find it only appropriate to bring you the best of both worlds into a ‘new’ chicken salad. This salad has the warmth of my mom’s with creamy Caesar dressing base and the light classic crunch of my mother-in- laws using fennel, green onion & toasted almonds.

Bring chicken breasts to boiling on medium-high heat; reduce the heat. Cover the pan and simmer until the chicken is no longer pink (170 degrees F). About 20 minutes. Let chicken cool completely after cooking before you cube.

Combine all other ingredients in a mixing bowl. Add in the cooled chicken and mix everything together. The salad should be creamy so if you need to add a little more dressing… go for it. Chill in fridge for at least an hour to help flavors set.

Serve with sesame crackers or on a warm flaky croissant.

Before this was a powder room it was an office spa